My loss. My Miscarriage Story.

My loss. I’ve been waiting for the right time to share my miscarriage story…

Earlier this year I was on my way to the airport to meet my husband in Berlin… my heart was bursting with happiness.

We’d been wanting another baby since Ben was just over a year old, but because of my husband’s work trips and missed ovulations it took us longer to conceive the second time around. I had stopped being so particular about tracking my cycle in the last few months and was going with the swing of things, not noticing that my period was late.

I did a pregnancy test before leaving for Berlin since I knew we would be enjoying a few drinks while there… My heart nearly exploded when I saw a positive pregnancy test!

I quickly ran to the doctor’s office and had all of my blood tests drawn up. My doctor confirmed the pregnancy. I then filled out my midwifery applications while en route to the airport.

I called my husband without hesitation to give him the happy news – what better way to celebrate baby #2 than a trip alone together in Berlin! I was excited to recharge my batteries before the dreaded first trimester exhaustion hit… I don’t think I could’ve been happier.

We had a blast in Berlin telling strangers about our new fortune and planning for baby #2. Would this baby be a boy or girl? How much older would Ben be? Should we move to Etobicoke or stay in the city? When would Ben realize he’s going to be a big brother? How would we announce this to our family? Should we wait? We spent the entire time imagining our new life as a foursome…

Until the day before we left Berlin. I woke up and realized I was sleeping in a small pool of blood. I was scared and nervous. I had spotted the night before but I thought perhaps that was implantation bleeding (similar to what I experienced in my first pregnancy)… this was much more blood. I didn’t want to face what I knew in my heart had happened.

to use the bathroom to sample my urine. I peed into a disposable cup and it filled with blood. My heart sank again. A few moments later I read the test saying “Nicht Schwanger” meaning “Not Pregnant” in German… I was devastated.

I debated what to do next. Part of me didn’t want to go to the hospital because I didn’t want them to confirm what I knew. Patrick left it up to me, but I knew I was delaying the inevitable.

I said I wanted to go to the Jewish memorial as we had planned. While walking through it, I just cried and cried. For loss – the loss of millions and the loss of one, and the loss of 1 in 4 for women all over the world.

I quickly realized the hospital was where we needed to spend the last day of our trip. On our way to the hospital my doctor from Canada called back to confirm that based on my HCG #s I was 5-6 weeks pregnant (at the time of testing), which would make me closer to 6 at the time of miscarrying.

I had an ultrasound and blood work drawn up at the hospital in Berlin. The doctor showed us the embryonic sac on the screen and said “it’s still in there, but it’s on it’s way out”. Again, my heart exploded into a million pieces… She tried to comfort me saying it wasn’t my fault and was out of my control. There was nothing I had personally done, and these things can happen early on. It didn’t matter, I was still devastated. I began to replay all the things that could have gone wrong in my head.

I’ve never experienced such a high and then a drastic low in such a short period of time.

Women suffer losses at many stages of pregnancy. Reading stories of other’s experiences makes me feel like I’m not alone, so I’m sharing mine in hopes it might help someone in need feel supported too.

To the 1 in 4 women who have experienced this loss, I understand your devastation and that feeling of lost hope. Feel the devastation, grieve and mourn this loss, but never give up hope. Everyone’s journey is different.

I’m Elle! A Toronto-based Holistic Nutritionist. I’m a multi-passionate woman, but nutrition and understanding how the body works is really my passion. Through my own personal journey, I have trained my body to heal itself using strategic, natural tools and techniques. Now I’m ready to help others!
As a new Mom, I understand that wellbeing is a journey. I hope my expertise will inspire other parents to choose nutrient-rich foods and the right products to create a happy, healthy and sustainable home. Click Here to Continue Reading 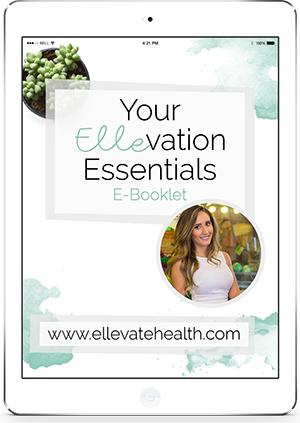 Thank you for subscribing. You will receive a confirmation email shortly. Please check your junk folder in case it got lost there.

(I promise not to SPAM you)